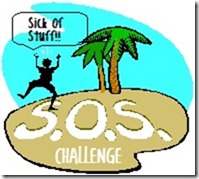 It’s finally September! I so long for the shorter days, the crispness in the air and the lovely scent of autumn on the wind. The urge to bake is revving up again, and I dream of breads and anything pumpkiny emerging from my oven once more. Sigh…
It’s also the beginning of my Sick Of Stuff decluttering challenge that I’ve recently imposed upon myself. Are you curious about how I’m doing? Let me tell you!
Even though I said I would officially start this September 1st, I found myself loading up bags and boxes of Stuff in the last couple weeks of August and taking them to Goodwill. One drawback of dropping stuff off at the store I usually go to is that they give you coupons. They always ask, and actually, I could say no, but…well, I just don’t. I will have to work on that. The good news is that even though I did shop there a couple times, I brought back home WAY less than I took in, so I’m still ahead.
It’s a good thing I started early, though, because my dear honey hurt his back at work the other day so I’ve been busy taking care of him, plus we just had a few busy days already this month and I haven’t taken out a bag or box every day so far. It’s only the 5th, and I’m pretty sure that what I took out in August covers all of September so far. And, today I dropped off two garbage bags of Stuff – one I had loaded in the van last night but forgot to drop off while we were out, and one large, black trash bag full of toys and kid’s books and some things in my kitchen I finally decided I could let go of because actually, I hated them. I don’t know why I hung on to that infernal Pampered Chef potato masher that I couldn’t stand for so long. Every time I used it I grumbled about how much I didn’t like it. But now, it’s gone, and the things in the drawer it once resided in are all things that I use often and don’t make me mad.
I look around at all the things I KNOW I could get rid of, and still feel that “but I might need it some day” urge to hold on to them. It’s a process, I know, but I’m trying not to get overwhelmed by the bigness of it. I’m trying to focus on what can I part with right now, today? Even if it is just one thing, that is one less thing cluttering up my space and collecting dust.
Books will be the hardest to part with. And I know, I could get a Kindle or something, but I just love real, honest to goodness books. I love the feel of them, the smell of them (as long as they don’t smell musty, dusty or smoky!) and you just don’t get that in a Kindle. But many of those books don’t get read, so I’m just going to have to find a way to part with them one way or another. I thought maybe it would be a good winter project – read a book one more time for old time’s sake and then find a new home for it.
Overall, I am happy with what I’ve done so far. I don’t know that you can see a huge difference, but just knowing I’ve removed a bunch of Stuff that I didn’t love or use feels great. You can, however, see a big difference in the toy area and the shelf where we keep the kid’s books. It’s progress, and that’s always a good thing.
I’m going to continue to remove something from my home every day, even if it just gets to the back of the van to go to Goodwill, at least it is out of the house. I will remember to drop it off every week, since I’ll have to have room for groceries. “Odd-sized trash” week is coming up for our town, so I hope to have some trash to load up out front.
Well, there you have it, folks. I’m plugging away at my challenge and am trying to keep focused on the wide, clear, open space I long to have in my home – so I can breathe!
Share
Pin
Tweet
Share
Share

« It’s Over,Facebook. For Real This Time
Gluten Free? What Can We Eat, Then? »