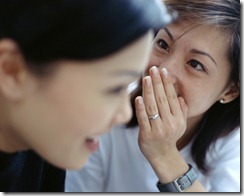 Gossip? Really? That is what You want to talk to me about this morning? Surely I’m getting a mixed- up signal here…that can’t be what You want to speak to me about…can it?
So, this time it really was Psalm 52 I was supposed to read. I tried to find a way around it…as I didn’t like this one either. Conviction has a way of making you feel uncomfortable when facing truths about yourself you’d rather not acknowledge. But I am thankful for God’s great mercy that is new this morning, and every morning.

Scripture: Your tongue, as sharp as a razor, plots destruction and works deception. Psalm 52:2

Observation: The tongue, when left to run amok, cuts and destroys…deception is its favored medium.

Application: As I read this passage, my first thought was toward a certain person in my life that has been a thorn in my side for years.  This person has used their razor-sharp tongue to plot destruction and work in deception against me many times. Then I immediately am reminded that when we hear a message and think of someone else first “who really needs to hear it”, we should also examine our own hearts to see if we need to hear it as well.  Have I done the same toward that person? Then I asked the Lord what in the world was He trying to tell me…and I hear that G-word whispered gently into my mind. Gossip. Have I been involved in gossip?
So, what is gossip? If you’re going to avoid something, you need to know what it is. I’m sure just about anyone would recognize that someone coming to you and saying “Did you hear about So-And-So? She…”, especially when that someone didn’t like So-And-So, was bringing some juicy gossip to them. Galilean Pastors has a nice study on gossip here.  Studying Joseph, who rejected the advances of Potiphar’s wife, we can learn a lot about the destructive force of the tongue:

Mrs. Potiphar devised a malicious lie fueled by anger, jealousy, bitterness, and resentment because of rejection.  She didn’t get what she wanted so she made up a lie, spreading it throughout her household servants (gossip) so her lie could be confirmed, even though none were there when it happened, they only had gossip to rely on.  Because of this chain of events Mrs. Potiphar set out to use the most powerful and damaging weapon of all–the tongue–to destroy Joseph’s unblemished reputation and character, especially to Potiphar.  As expected, Potiphar became outraged, so much so that he had Joseph, his personal and trusted attendant, thrown in prison.

Joseph’s spotless reputation and character was stolen by gossip (the gossip of Mrs. Potiphar and her servants).  Now, not only were they (Mrs. Potiphar and the other servants) gossips but they were thieves as well.  Joseph had some decisions to make, was he going to be faithful and obedient to God or was he going to become angry and vindictive doing the very thing that had been done to him.  Joseph chose obedience in honoring God and, because of that, God’s favor went with Joseph and stayed upon him; even in prison, gaining the favor of the prison warden. (Gen 39:21-23)

When we gossip, or even participate in gossip, we are actively and voluntarily engaging in a destructive purpose, character assassination and theft.  Basically, gossip is a destructive need for personal gratification, making one’s self feel good about one’s self by destroying the character and reputation of another.
You see “misery loves company.”  Some people cannot stand the thought of someone else succeeding, whether spiritually, physically, or financially; so they search for reasons to accuse and discredit the person, ministry, business, etc. to make themselves feel better about who they are.

But can gossip be even just plainly discussing facts about someone else? Facts that are unfavorable, yet still the gospel truth? And not brought up out of a malicious heart and spirit?
Gossip can also be defined as “…often half-truths and even truth that does not need to be said.”
Truth that does not need to be said. That is the one that trips me up. I can easily recognize and restrain myself from telling half-truths and outright lies, but many times see no problem with telling something that is the truth. And, let’s face it…some people are just a well-spring of unfavorable truth,  thanks to their own choices, but that doesn’t mean we need to spread that information around.  It’s been often said “if you’re not part of the solution, you’re part of the problem” and I think that is an apt description of gossip as well. Does what you are telling someone else, even if true, help the other person? Most likely not, if we’re going to be brutally honest about it.
I can honestly say that Psalm 52:2 does not describe me…at least not anymore. I admit to operating in that manner years ago, when I was much younger and immature, both chronologically and spiritually. But I can’t say I never gossip, unfortunately.  The majority of the time it is completely unintentional, it just happens…you don’t even realize what you’re doing until you’re in too deep. But there are occasions where the intent of my heart is not honorable when I talk about someone. Well, to be honest, it’s always that thorn in my side…never my friends…so friends, take heart and know that I’m not gossiping about you!
Even as I write this, I’m thinking I should change the wording in a few areas, so as not to be obvious about whom I am referring to. If you know me, and my life, at all…well, you don’t have to be a rocket scientist to figure that out. But this illustration is not meant at all in that manner…it is a practical illustration of something many people struggle with. We all have people in our lives that are difficult to deal with, it’s how we handle those situations, and the temptation to gossip about them, that either glorifies Christ and brings blessing to those who persecute us or fuels the destructive, raging fire of the tongue…which is truly an unruly evil that can not be tamed. It can only be brought under submission to Christ, and that takes a very concerted and determined effort.
Prayer: Father, forgive me for participating in gossip against those who hurt and persecute me. Help me to recognize gossip for what it is immediately…and give me the grace I need to say “I’m not going to gossip about this person” instead of revealing what I know, even if it is true. Help me to bless those who persecute and spitefully use me and only speak words of life and blessing about everyone. Thank You for forgiving me…thank You that Your mercy is new every morning.

click on the logo above to learn more about SOAP

« SOAP Devotion: You Love Me Anyway
Music to a Real Foodie Wife’s Ears: “I Feel Like Crap” »