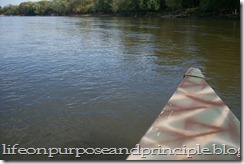 If you ever find yourself canoeing down a river…or worse yet, heading back upstream to the boat launch after having been on the river for a while so you can go home…I would like to caution you against saying four little words. There’s nothing inherently wrong with those words, in fact, they really are good words to say. Just not when you’re in a canoe. Heading upstream…
My husband wanted to check out a potential area for duck hunting, so we packed up his newly-camo’ed canoe and headed to a fish and wildlife area about four hours away. It was a beautiful day…I saw gorgeous fall foliage on the way and was able to read a really good book I’ve been enjoying recently.
A very nice guy helped get the canoe off the van at the boat launch and we set off down river. The scenery was beautiful, we saw all kinds of interesting things…blue herons, a boot, a crazy little house that looked like some place the team from Criminal Minds might end up at to investigate some gory crime (Dueling Banjos danced  briefly through my mind as we floated on by), several eagles – even a male Bald Eagle. It was lovely and relaxing. And I  enjoyed just spending the day with my husband.
We turned around to head back, which meant we were heading upstream. Against some pretty strong currents at times. We were very thankful for the trolling motor hubby had brought along. All was going well as we headed back to the boat launch.
And then…I had to go and silently whisper Four Little Words.
Like I said above, there’s nothing wrong with those four words. But, as I keep forgetting…they are just entirely too vague. They leave so much open to wild interpretation. I really should know better by now.
What did I say?
In a moment of Creation-inspired awe and wonderment, I invited the God of the Universe…YHWH…Adonai…to speak to me. I wanted to hear what was on His heart. I wanted a glimpse of the multitude of thoughts He has toward me. Which are all good, according to my favorite verse:

“For I know the thoughts that I think toward you, says the Lord, thoughts of peace (wholeness, well being, health, blessing) and not of evil, to give you a future and a hope.”
Jeremiah 29:11

So there I was: heading upstream with my beloved, in awe of the beauty around me, filled with joy at being a Daughter of the King. Feeling fortunate to be part of God’s glorious and magnificent creation. And then…
GOD SPOKE.
He did not speak by tipping the canoe, for that I am very thankful. But, He spoke with an Object Lesson.

ob·ject lesson, noun \ˈäb-jikt-, -(ˌ)jekt-\ : something that serves as a practical example of a principle or abstract idea

Mere moments after offering up that silent supplication and posting via cell phone praise for the inventor of the trolling motor and the fine folks at Minn-Kota, the trolling motor got caught on a log. The new prop, fortunately, was spared any damage but the switch that controlled the speed of the motor was stuck on one speed, which was not Fast.
I thought I was prepared for our trip, I even had a little first aid kit packed and snagged some toilet paper from a Walmart restroom…just in case. But, we did not have any tools with us. What we needed was a long philips screwdriver. My husband tried every MacGyver trick we could possibly come up with. If only we had some gum, a paper clip and a comb…
We were then faced with paddling back, for the most part. Fortunately, the trolling motor was at least not stuck in reverse. But the current was so strong in some areas it didn’t help at all. And the river would randomly go from deep to so shallow our paddles were hitting bottom with each stroke – no way could you have the motor down in the water in those places. And we were several miles down river…this was not exactly what I meant when I said “Speak to me, God.”
But God was speaking, and what I was hearing was that whenever we decide to go our own way and do things in our own strength, it is just like trying to paddle upstream. You paddle, paddle, paddle and don’t hardly get anywhere. You wear yourself out and get frustrated. Things go wrong. You find that you are completely unprepared and completely alone. It takes longer to get where you were going, and often times it is right back where you started…because you went off on the wrong way to begin with.
I know I have been through this object lesson before. Several times. I’m pretty sure I don’t need to go through it again…only, we are currently trying to discern God’s will for our family. My husband is looking for a job, we are willing to go where God says to go – we just need to hear where…and when. I feel like now is the time to go, and we are pretty sure about where. But, I guess it’s always good to be reminded NOT to try to force things before their time and not try to do them in our own strength.
Our canoe trip adventure sure didn’t go the way we expected. Why that might have been a surprise is beyond me. But, we stayed dry and unharmed, learned that we work well together in adversity, and were reminded again how important it is to “go with the flow” when it comes to God’s plans for our lives. And, in spite  of it all, we had a really good time. Just ask my husband about the frog…