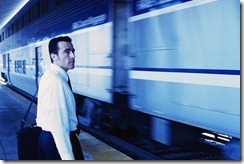 The older I get, the more I realize how important it is to make good decisions. The kind that don’t leave the bitter aftertaste of regret behind. The kind that bring enrichment to the lives of those around us, not just to ourselves. Even with that realization, though, it can still be hard to step out and do something new when the destination is unclear. But that is where faith is important…
I read something this morning that fits our situation these days very well. It’s in Time to Rejoice: Devotions Celebrating God’s Love by several Women of Faith authors. This particular selection was written by Lisa Whelchel and was called Catch That Train.
She talked about a time when her mom called her up and asked her to go on a bike riding trip in Vermont. Neither of them were “cyclists” and she hadn’t been on a bike in years. They really had no idea what to expect and were surprised on more than one occasion. The rest of the group were obviously experienced in such things…from their gear to their abilities.
Still, they didn’t give up. They made the best of it and enjoyed the trip.
What really spoke to me was the following passage at the end of the story:

I hate to think what I might have missed had we not impulsively decided to do something we’d never done before. Or if we’d been daunted by the fact  that we didn’t have all the right training or equipment. Or if we’d given up when we learned that the journey would be longer and harder than we anticipated.

This wasn’t the first journey in my life when I truly didn’t think I could make it to the end. And I’ve certainly grumbled before like the children of Israel. But I learned that God was the one who set me on the path; He promised to go with me, and He would bring me to the destiny he planned for me from the beginning. I want to have the same attitude about these harder life journeys as my Nanny had about her life: to hop on that train. I’m sure God has something good planned!”

Her beloved Nanny  always told her “Catch that train while you can because you never know if it will pass this way again.” So it is with opportunities in life. We have to trust that the Conductor knows where He is taking the train and that we will arrive at our destination.
I have to remember right now that God is in this and He knows what He is doing. It doesn’t matter if I have the right experience or equipment right at this moment – God always equips and empowers those He calls. We will have what we need when we need it, we only need to trust Him. And listen when He speaks. He will never let us down and always has good in mind for us. Don’t miss out on the best adventures God has for you by being afraid to hop on that train!
Share
Pin
Tweet
Share
Share

« Coffee With the Enemy
4 Words to Never Say While Canoeing »