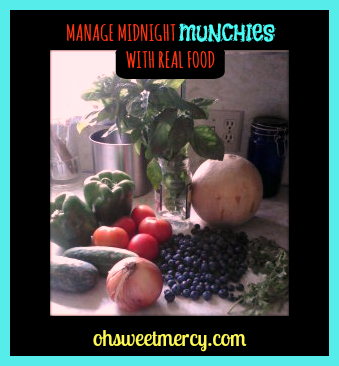 It’s midnight. You’re hungry. You find yourself bathed in the glow of the refrigerator light as you look for something to snack on…again…even though you promised yourself no more midnight munching. Did you know that making the switch to Real Food can help you manage that sneaky midnight munchie attack?

Absolutely! Getting rid of “junk” foods  and eating whole , real food can help you avoid midnight munching – because, unlike their junky cousins, real food actually needs to be prepared, and I’m not talking about nuking it  in a microwave. For example, in order for me to eat something made with grains, they need to be soaked – for at least eight hours. Then they need to be cooked. I really don’t feel like going to that much trouble so, I might as well sleep!

Veggies? A good choice probably, but I honestly don’t feel like cleaning, peeling or chopping anything right now. And let me be very real here – I’m just not often that “on the ball” to have veggies cleaned, peeled and chopped into handy snack sized portions. I’d like to, but it just doesn’t happen that often! So…I might as well sleep. Same goes for fruits, which probably aren’t a great choice before bed when you’re trying to keep your blood sugar controlled.

Dairy? Easily consumable, as long as it’s yogurt, fresh raw milk, butter, sour cream or cheese. Cheese and yogurt would be easy to eat, but I’ve had very bad experiences eating dairy too soon before laying down to sleep. Like wicked awful heartburn. Never again. And I’m not even going to mention one of my biggest weaknesses. Let’s just say it starts with an “i” and lives in the freezer with all its sweet, creamy deliciousness. Nope. Not going there.

Meat? Mmmmmm. I don’t have any left over or thawed, which means I’d have to wait to defrost a chunk of meat then cook it. I wish I had some of the delicious, moist turkey breast I cooked in my crock pot this week left over, but since it got devoured that means I’d have to cook another one. For at least 6 hours. You guessed it, I might as well sleep!

I do usually try to have nuts or seeds on hand for quick protein-y snacks, but I’m all out at the moment. I have a teenager who seems to think nuts and seeds can not reside in our pantry for more than 24 hours. I have to “squirrel” the nuts away. Seriously.

Those are the kinds of foods I have at my disposal right now. None of them involve simply opening up a package of some kind of snack food and eating it. Making the switch to Real Food can help you avoid the kind of mindless eating that the food industry wants you to do (and spends obscene amounts of money trying to convince you that you need to. Because their products are so healthy). By eating intentionally, you can make better food choices and feed your body, and your family’s, foods that nourish and heal instead of just filling an immediate craving.

I’ll be honest…I’m kind of craving a cheeseburger and some french fries. Or cheesecake. But obtaining those things would mean I have to get dressed and drive to another town. I’d rather sleep, really. Besides, I would feel awful tomorrow if I gave in to those cravings, and that is just not worth it.

Oh, and before I leave you , here is one more tip that can help manage the munchies late at night…sleep upstairs in the room farthest away from the kitchen! Even though I feel hungry and want to eat something, I just don’t feel like walking aaaaallllll the way down to the kitchen. So, I might as well sleep.

How do you manage a munchie attack in your Real Food lifestyle?

« How to Make Taco Seasoning Mix – Healthy and Frugal!
{Guest Post} His Grace is Sufficient…Even at 5 A.M. »