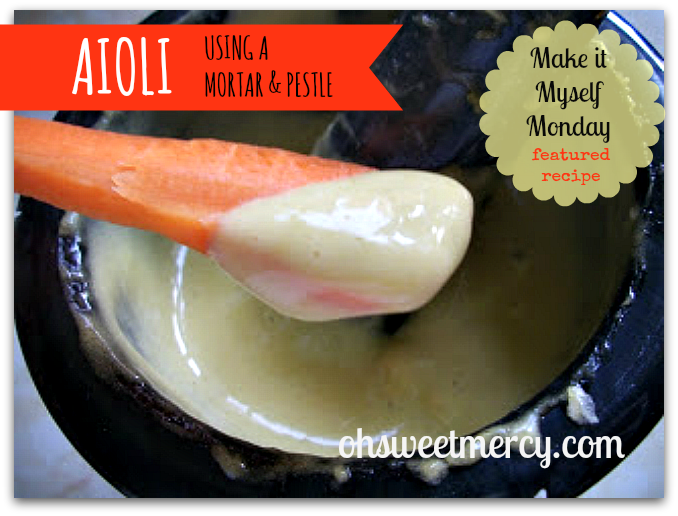 No matter what you might think about the French, you can’t argue with the fact that they know how to cook. Aioli is thought to have originated in Provence, France although I also came across a post at CliffordAWright.com that states that the first mention of anything resembling aioli dates back to Pliny the Elder (A.D. 23-79). No matter where aioli’s origins lie, it is absolutely heavenly…providing, of course, that you like garlic. And mayonnaise. But it’s more than just adding some garlic to mayo.

Aioli is basically a garlic mayonnaise and can be easily transformed into many flavored varieties by adding other herbs and spices. Some recipes call for dijon mustard, which I think would kick up the spice factor…raw garlic is rather spicy on its own.

There are many aioli recipes and techniques documented out there on the web…I read several, watched a few videos, then headed to the kitchen to try out a lovely granite mortar and pestle, a gift from my  mother in law. I had wanted one specifically to make aioli, although you can use a food processor or an immersion blender. Being somewhat of a traditionalist in nature, at least when it comes to foodie type things, I of course wanted to do it the traditional way. A mortar and pestle are also very handy for crushing spices and herbs so I’m sure I will put it to good use throughout the year.

If you’ve never made mayonnaise before, I must warn you that it can be kind of tricky. You have to start out adding the oil S-L-O-W-L-Y…as in drop by drop for the first tablespoon, then in a thin stream after that, constantly whisking (if using a whisk) or stirring the pestle in the mortar. I’ve made blender mayonnaise and it’s really very tasty, especially when you have delicious, fresh, pastured eggs. This is the first time I’ve made mayo by hand, and honestly, it wasn’t that hard.

FIRST…make sure your ingredients and utensils are all at room temperature. 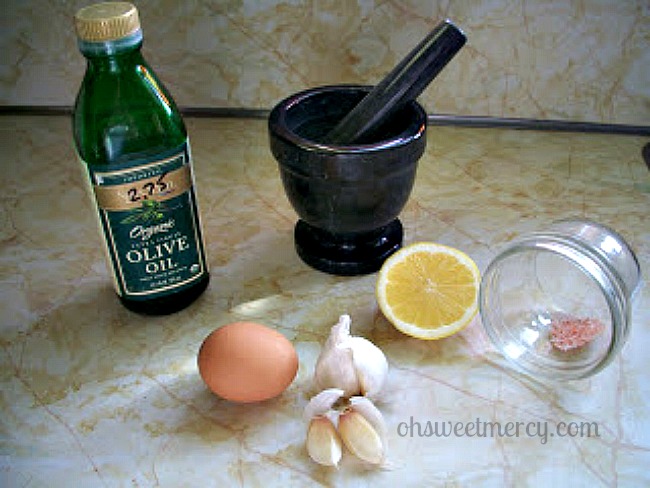 Cut the end off the garlic cloves and peel them by whacking them with the flat side of your nice big chef’s knife…or whatever method you prefer for peeling garlic. I like whacking them, myself. Mince the garlic and add it to your mortar, along with a generous pinch or two of salt. 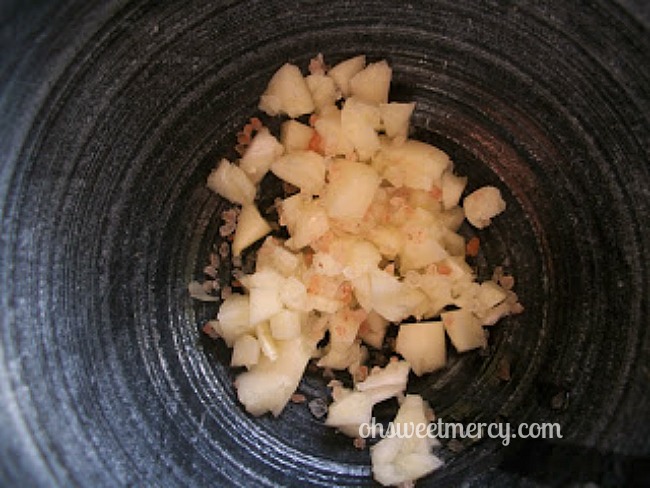 I didn’t really mince the garlic, just kind of gave it a good chopping…but in retrospect I should have taken the time to mince. You can also use a garlic press…I have one, I just didn’t want to wash it. The salt, by the way, helps to break down the garlic and make it into a paste so you really don’t want to omit it. If you use a healthy sea salt or mineral-rich salt such as the Pink Himalayan, it’s much better for your ticker than regular old table salt.

Using the pestle, begin grinding the garlic and salt together slowly until it forms a paste. This is somewhat time consuming, but if you mince your garlic or use a press it will not take as long as it did for me. You’ll have to keep brushing the garlic bits back down into the mortar at first, but then it will make a nice, smoothish paste that clings to the side of the mortar. 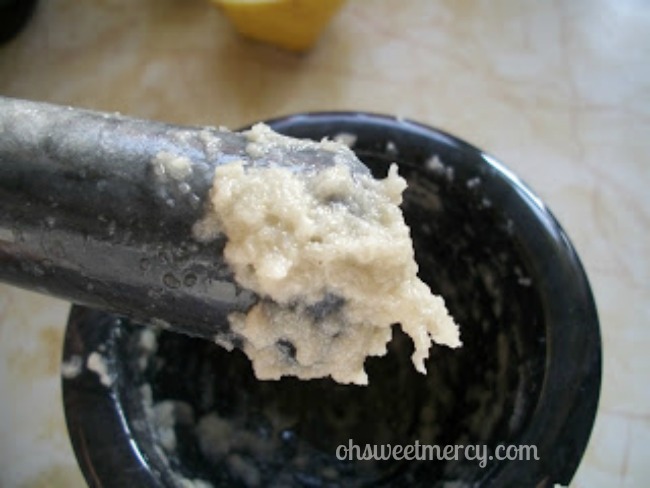 Next, add your egg yolk. Give it a good whirl around the mortar for about a minute. 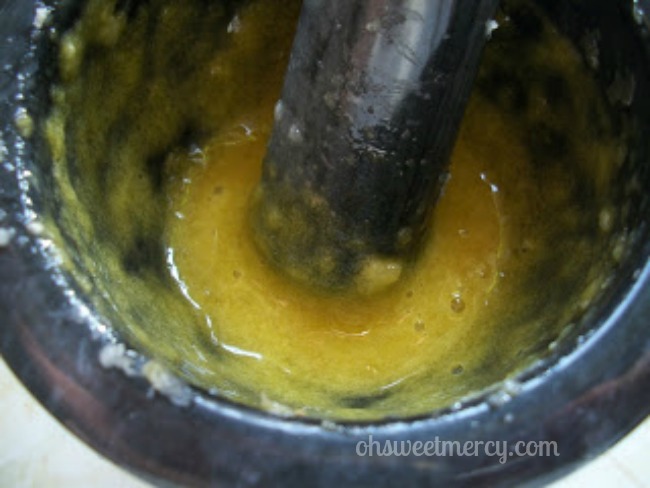 Some people say to add the lemon juice later, some now. One video I watched said the acid in the lemon juice essentially “cooks” the egg yolk. I added it at this point, next time I will try adding it later and see if it makes a difference. 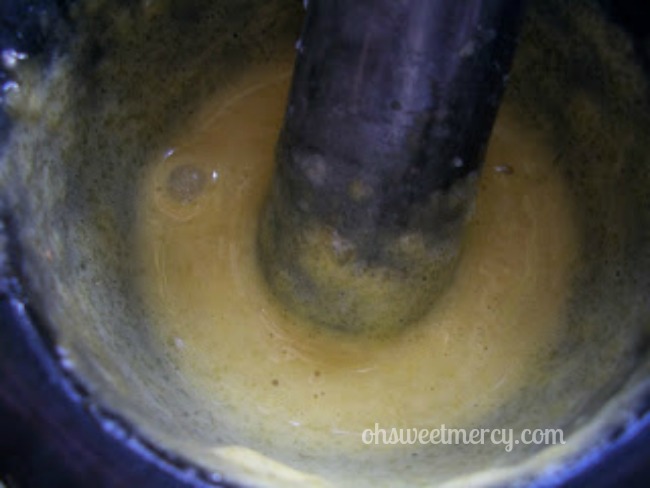 Give it a good whirl around the mortar, too. The guy in the video says until it’s kind of frothy.
Now we get to the tricky part…adding the oil. I know from personal experience that you absolutely do need to add it slowly at first. One video I watched, the lady had her oil in a lovely glass jug with a teeny, tiny spout so you could pour it out drip by drip. I just have my plain old oil jar, so I added just a few drops at a time until I had about a tablespoon in there, then slowly increased how much I added. You must constantly stir the pestle (or whisk) in order to create an emulsion, which is a suspension of small globules of one liquid in a second liquid with which the first will not mix.
Continue adding oil until you have a nice, creamy aioli. In some of the videos I watched the aioli was much more stiff than what I ended up with…but I liked the consistency and the flavor so I stopped. I don’t know how much oil I used, to be honest with you. I just started throwing things together, like usual, but the ingredients listed below are from an actual recipe I found at Gourmet Sleuth, minus the dijon mustard. 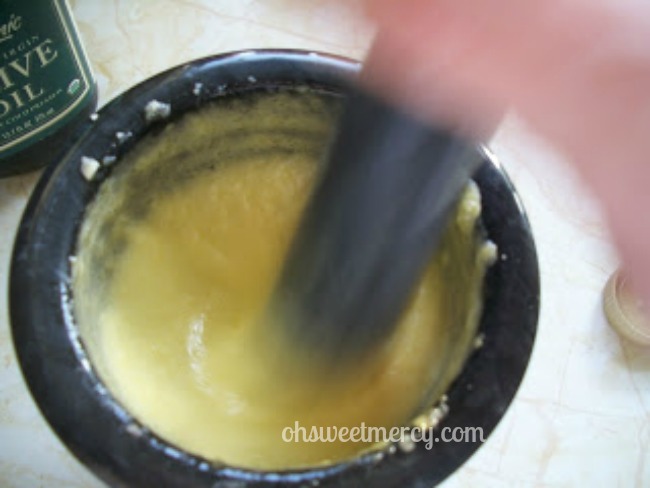 Here I am, whirling the pestle around the mortar vigorously. It’s amazing how fast it emulsifies in this little thing. I love it!

When the aioli is at the right consistency, taste it. Add more salt if you like. Add more lemon juice (I did, to kind of cut back on the intensity of the garlic). You can also add herbs such as basil, or to make it spicier, add horseradish, ground chilis, or other hot spices. I can’t wait to experiment with this! 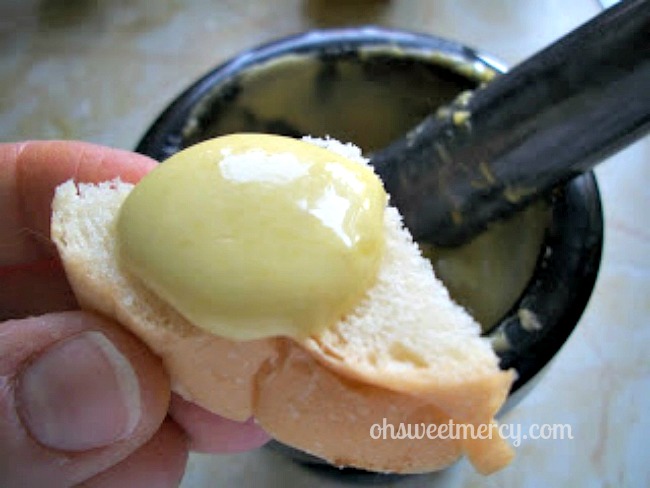 All that’s left now is to eat this creamy, garlicky wonder. I tried it with carrots (fabulous!) and some leftover French bread chunks (amazing!). It’s supposed to be great for crudités, and is traditionally served with fish, meats and vegetables, depending on what region you’re in. I can tell you that in Grand Rapids, Michigan, at the Electric Cheetah, it is something akin to Nirvana on a grass fed beef burger….
Do you like aioli? What are your favorite ways to eat it?
Continue to Content