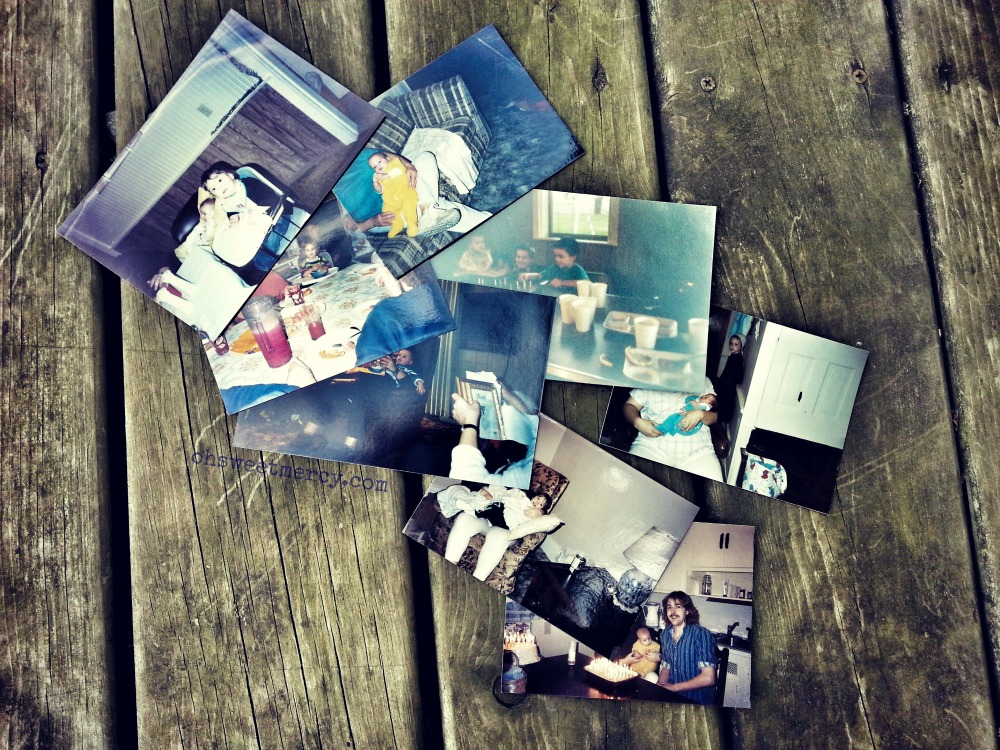 We went to a family get-together this weekend, to celebrate my husband’s grandfather’s eighty-seventh birthday. While we were there, boxes of old photographs were brought out and I was in heaven! Even though I wasn’t in the old photos (although I could be, I just didn’t get through all the pictures!), I enjoyed looking through them. I was also on a mission – looking for pictures of my stepsons when they were babies. You see, we have a blended family, but not a lot of blended family pictures – at least not of my stepsons.

Our blended family story is kind of crazy, and long, so I will just sum up:

There are a lot of details in between those lines…some of them are great, others not so much. If you’ve ever been part of a blended family then you probably know what I’m talking about. My stepsons are terrific, but I can’t say that their mother is my most favorite person. I’m not naive enough to think I’m hers, either. Fortunately, we can at least be in the same room together and even have polite conversation. I can even honestly say that I no longer want to stab her in the eye with a fork.

Hey, what can I say…I’m not perfect. Believe me! I’m so thankful to YHWH for the healing in which he has bathed my wounded heart and the deliverance from the bondage of bitterness and unforgiveness he has walked me through. That is why I don’t want to stab her in the eye with a fork anymore. It’s even part of the reason I’m better at housekeeping. I even can find some compassion in my heart towards her and hope that she will also walk in the same freedom I have found, even when others may have given up on her.

Why don’t we have baby pictures of the boys? That is part of the long, crazy trip my husband and I have been on – separately and together. I won’t go into the details, because they’re in the past. It’s fair to say of the people who were supposed to be these boys parents, myself included,  that they didn’t always have their big-kid pants on…things were done and said that really didn’t help the situation at all. So, I have lots of pictures of our two children we have together as babies, but none of the boys. I was so happy to find pictures of them – even newborn pictures of the oldest.

Their mother is in them. What do I do with that?

I can’t deny their heritage, certainly! Without her those three amazing young men would not have been a part of my life. They are a huge part of the shaping of the woman I have become today, so by extension (and a lot of sandpaper moments), so is she.

But, I gotta be real – I don’t necessarily want her mug hanging on my walls. 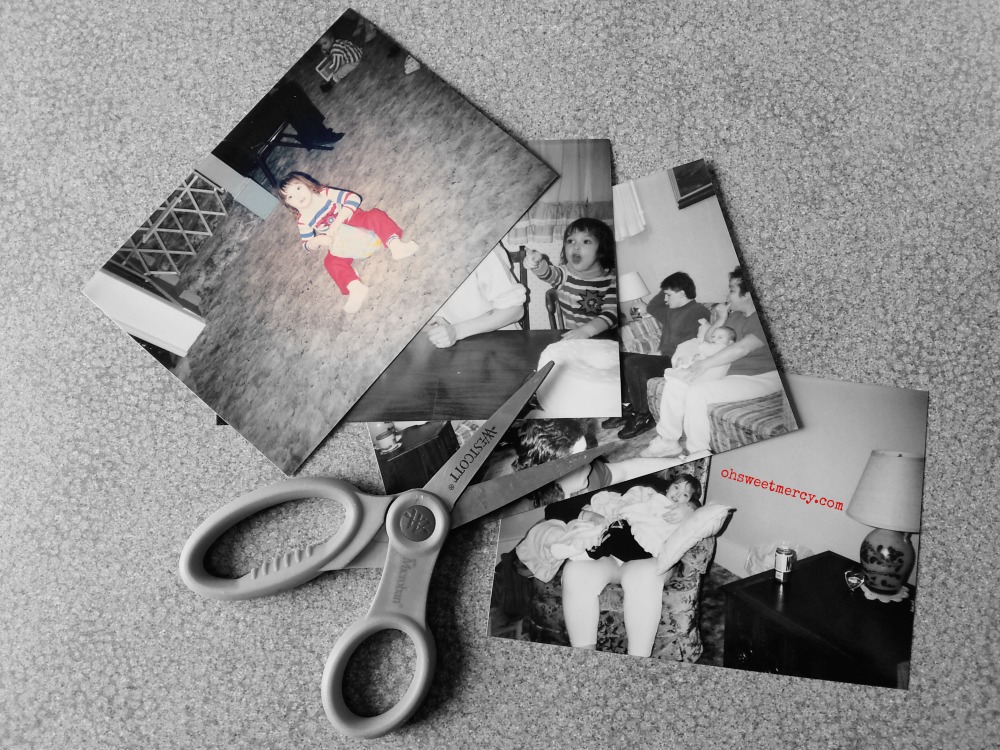 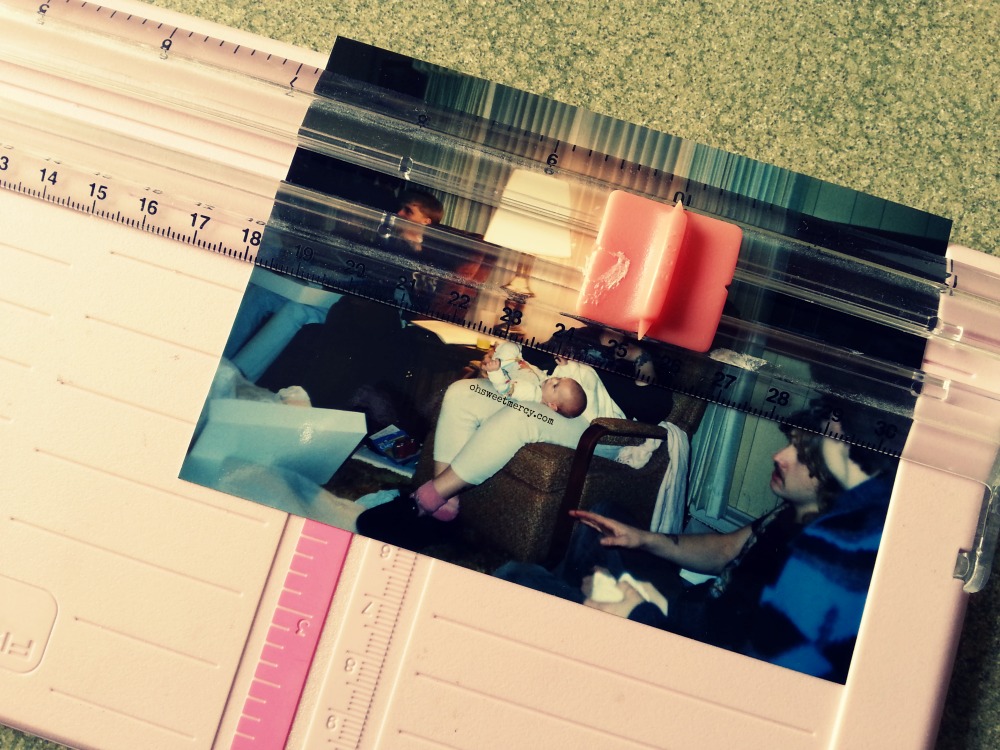 I could easily remove her from the pictures. But that would be so…permanent. I don’t know if there are negatives (or where they may be since I can’t remember now which envelopes I removed these pictures from – and no, I didn’t steal them! Everyone was free to take whatever pictures they wanted). And no matter how much I may wish that I were their mother instead, it will never change the fact that she is their mother.

Right now, the boys aren’t exactly thrilled with their mother. Like I said, it’s always been complicated with her. Right now, they probably wouldn’t care if I cut her out of the pictures. But, later on, when they are older and wiser and their hearts have healed, they may regret that.

So that’s why I can’t quite bring myself to cut her out of the pictures.

One project I plan to work on over the winter is going through family pictures and get them up on the walls. I haven’t put any up in our new home yet because I want to be very purposeful about what pictures I choose and where I put them. I want to include these pictures of the boys as babies, even though I wasn’t part of their life then. I just have to decide how to display them in a manner that is not necessarily disrespectful to their maternal heritage.

Or, maybe I can just put my big girl panties on and hang a picture or two with their mother in it. Maybe.

HOW DO YOU HANDLE BLENDED FAMILY PICTURES?