It’s been over two weeks since I returned from my trip to Israel and Jordan, called Taste the Honey, and I know many of you are eager to hear about this trip of a lifetime. Where to begin?

How can I possibly describe the amazing things I did and saw and do them justice? Or convey the deep, spiritual realizations I had in a way that you can understand? Mere words and two-dimensional photos can not pull you into this experience, for sure. 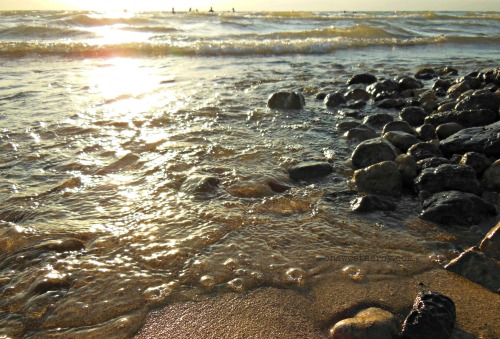 But, I’m going to try anyway because…

One thing I learned on this trip is that things aren’t always as hard as they seem.

Countless times I looked at the trail/steps carved in stone/hill/mountain/ that lay before me and cringed inside. It looked so steep. It was hot. I was tired. I didn’t think I could take one more step. There were rocks and thorns (and goat poop!) everywhere. And many times a steep drop on one side or the other that literally took my breath away, caused my heart to flutter and made my head spin as I peered over the edge. And more than once I would look up from my endless vertical plodding, hoping that the summit was near, only to see that it still seemed as far away as when I started. 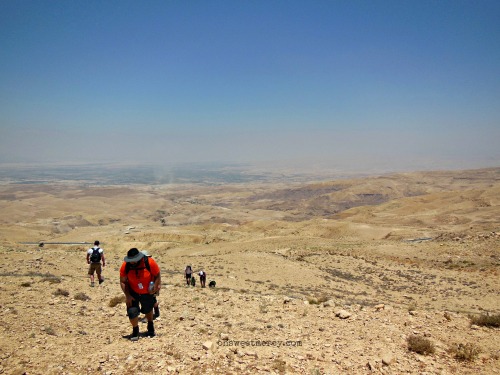 Yet just as many times, it seems, that in the midst of our vigorous trekking we would suddenly find ourselves at our next destination. That enormous mountain we saw when we started our climb was effectively reduced to the proverbial molehill.

How often do we view problems or obstacles in our lives the same way?

Sometimes, though, the journey ahead of us certainly is as hard as it seems.

One of our “significant hikes” was up Mount Carmel. The day was hot. The sun was blazing. Trees to shade us were very few and far between. I don’t know much about grade percentages, but surely it had to be like a 300% grade. Ok maybe I’m exaggerating a bit, but it was steep. Not a sheer rock face of course (that came later), but not a gently rolling hill by any means. This one was as hard as it seemed to me, and it kicked my tail. Not even gonna try to sugarcoat it. I was wiped out afterward. 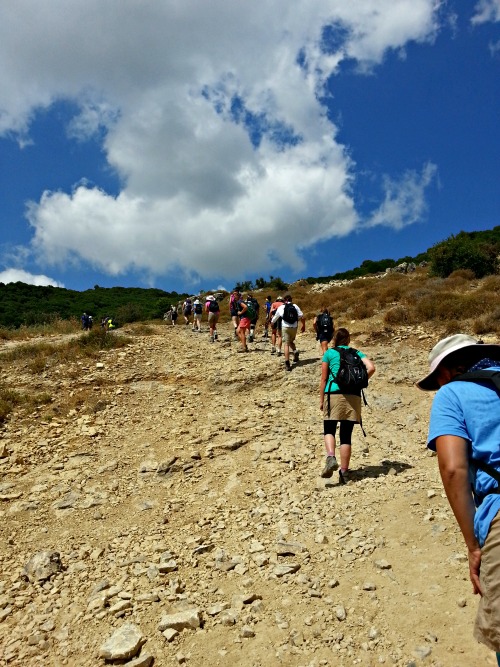 Up, up, up Mt Carmel

As I then sat at the top of Mount Carmel, listening to our Fearless Leader Wyn talk about Elijah and the 400 prophets of Ba’al, a sobering thought came to mind. How often to we toss around these Bible-ese sayings like “Oh Lord, give me a double portion of the anointing of Elijah?” without really understanding what that probably entailed?

Elijah climbed this mountain at least twice. He endured intense spiritual warfare. He prayed fervently (and I’m sure fervent prayer in Elijah’s time was not what we think it is now), not just once but seven times. Do you think those 400 prophets of Ba’al went to their destruction without a fight? Certainly he faced physical battle as well. And then he ran 18 miles to Jezreel.

Mercy, folks, I don’t even run to the mailbox!

Elijah was anointed for that specific task. He was supernaturally empowered to endure the mental, spiritual and physical battles to which he was called. If we ask for a double portion of his anointing, we better be prepared to accept the task for which we will be anointed to face. Otherwise we may find ourselves in the middle of great adversity and wondering what we did wrong. Wondering why YHWH would allow this unbearable circumstance into our lives, when actually we just got that for which we prayed.

I went to Israel and Jordan expecting and was not disappointed! 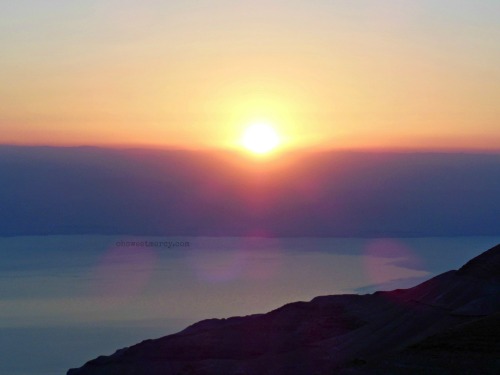 The sun setting over the Dead Sea, as seen on a hill near Machaerus, location of one of Herod the Great’s palaces.

To prepare for this amazing trip to Israel and Jordan, we were encouraged to come with a heart and mind open to what YHWH wanted to do in and through us. To be open to whatever He chose to reveal to us. Certainly willing to do that, I was, but I did have some expectations: 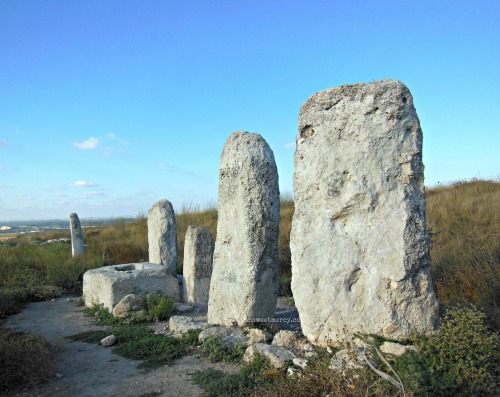 Ancient standing stones of unknown origin. Were they erected by pagans? By followers of YHWH? Ironically, they were put there as a remembrance of something and today, no one knows why. 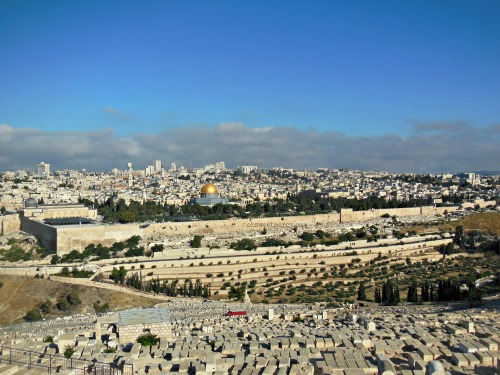 The iconic view of Jerusalem, from the Mt of Olives. It hit me there how ironic it is that Jerusalem is remembered for the Dome of the Rock.

Some things I was surprised by were: 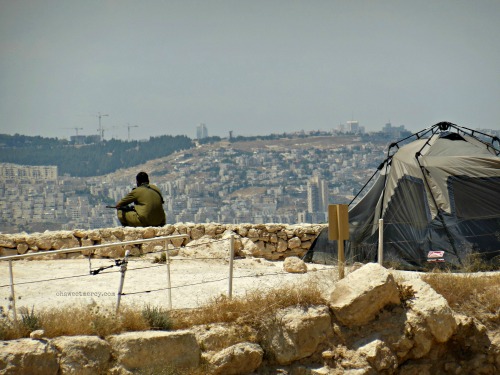 A sobering reminder in Israel that we must always pray for the peace of Jerusalem. 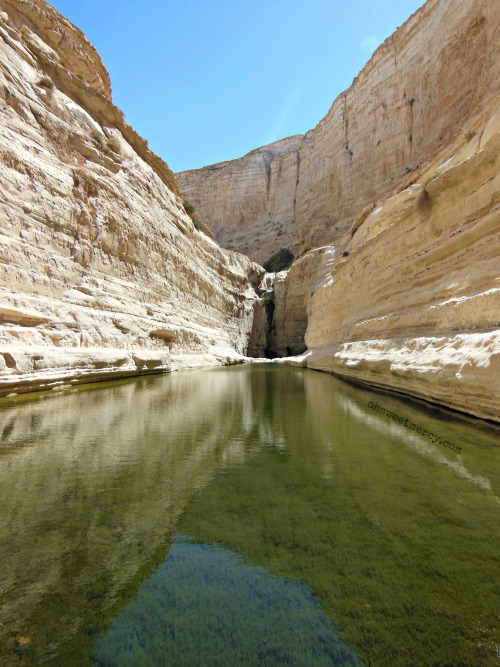 En Avdat…a refreshing oasis after “wandering” in the Negev.

I was, however, unprepared for one thing.

Even though I expected to find this trip to Israel and Jordan spiritually and emotionally challenging, I was surprised at just how much. Around day 12 I think, I felt like I’d hit a wall. The picture that kept coming to mind was of the beautiful mortar and pestle my mother in law gave me a few years ago. I love that thing! It’s wonderful for making aioli, grinding salt for popcorn or spices and I use it often.

As I plodded along, one foot in front of the other, my eyes on the rocks, thorns and goat poop ahead of me and the destination that always seemed just out of reach, I saw that mortar and pestle. It was filled with toasted cumin seeds being ground into a fine, fragrant powder. 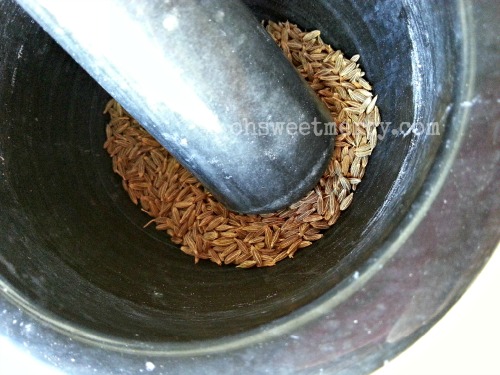 That is exactly how I felt.

Toasted. Ground. Completely undone. YHWH had shown me good things about myself – like that I was stronger than I thought and could do more than I realized. But he also showed me that I fall short in so many areas. No one likes to realize things about themselves that are unpleasant, and I am no exception.

I know more than one post will come out of this trip, because I will be “processing” this experience for a very long time.

After many years of walking with  YHWH I have learned that with me, the lessons are always a process. The healings and deliverances are rarely instantaneous. There always seems to be something to learn in that darn process. I had kind of hoped that since I’ve learned not to expect instant miracles, perhaps YHWH would surprise me and do one. 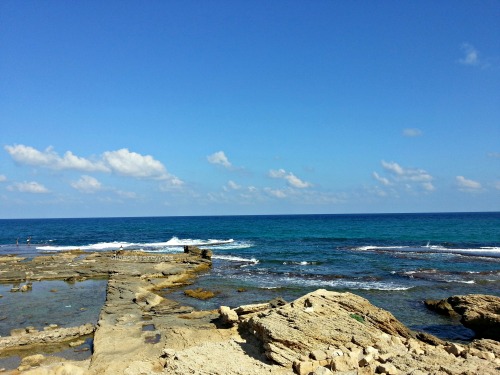 The beautiful blues of the Mediterranean, at Cesarea.

It was not to be, I guess. Although I did get over my fear of flying so maybe that was the instant miracle…just not quite the one I was hoping for. Yes, I got on a plane in Chicago nicely calmed by an anti-anxiety medication and had a great flight. Then a few days into this adventure, I realized that if I could do all the crazy things I’ve been doing without meds, surely I can get on a plane without them too.

And I did. Praise YHWH!

I’ve been on a trip of a lifetime, and I will carry it with me for the rest of my life.

I will forever be profoundly grateful to the people behind the prayers and resources that made it possible for me to go to Israel and Jordan – the Holy Land. And since much has been given freely, then certainly I must freely give of my experience all that I can. It is my hope that every decision I make from here on out will be influenced, in some great way, by the many days I spent walking in the footsteps of the ancient fathers of our faith and our Messiah Yeshua and that those decisions will bless others in some way. 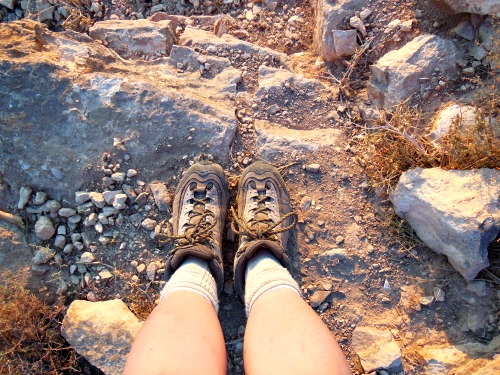 Thus says YHWH: “Stand by the roads, and look, and ask for the ancient paths, where the good way is; and walk in it, and find rest for your souls. But they said, ‘We will not walk in it.’ Jeremiah 6:16

I’ll be adding more posts about my adventures in the Holy Land and some of the profound things YHWH revealed to me there. I hope you’ll come back and taste the sweet honey of YHWH and his word that I found there!