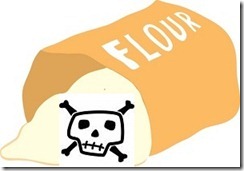 There is nothing more scrumptious than the heavenly aroma of freshly baked bread, blanketing my home in total comfort. I’m a big fan of bread, and many things made with wheat. In fact, I just recently ordered a 50 pound bag of organic soft, white wheat berries…and I wasn’t out of the last bunch I ordered. I was thinking ahead, you see. Sometimes, I think I really shouldn’t think…
To make a long story short, God has convinced me to go gluten-free. For how long, I do not know. I’ve been having issues with keeping my blood sugar normal, and in my investigations on how to fix that I’ve come across interesting information regarding a connection between gluten sensitivity and high blood sugar. Yes, I know High Blood Sugar has a shorter name, but I can’t go there right now. That’s a whole other post. Probably filled with a lot of whining and profanity, to be perfectly honest.
Anyway, I have noticed that I consistently have much higher blood sugar readings after consuming something with wheat or oats, and while oats don’t have gluten, unless they are specifically labeled gluten free, they may have become contaminated in the processing if other grains containing gluten (such as barley and rye) are also processed on the same equipment.
I have wondered for some time if my son, Mister Wiggles, has some kind of gluten issue, but just didn’t want to do the elimination diet. It’s a pain in the butt, it’s expensive, and it’s hard when you’re not at home and everyone around you is eating whatever they want. As I read what I just typed, I am thinking “What a bad mother I am! I’ve thought my son had an issue, but it’s not until I have a serious problem that I do anything about it. So selfish!” Be that as it may, what’s done is done and here we are today. This week, the kids and I started doing the GF thing, my husband is doing SLG (Significantly Less Gluten…ha ha!) as long as he eats at home, as will anyone else dining at our table for the unforeseeable future.
In the interest of saving time, both yours and mine, here are some links to informative sources of information regarding gluten:
Gluten-Free-Diet-Help.com
Kalish Research – Dr. Daniel Kalish
Gluten Sensitivity vs. Celiac Disease – What Do We Know?
Already, in just a few days (five, to be exact) of not eating any gluten…aside from the little girl I  babysit giving Mister some animal crackers, and me eating some Hidden Valley Ranch dressing (containing MODIFIED FOOD STARCH…oops…)…we are already seeing indications that this is a better way for us, specifically, to eat. Mister is noticeably less wiggly (he’s still a boy, and still ornery…I think that is just the way he is), Sister reports feeling less tired and more alert, and I just feel better in general and have not had such high blood sugar levels.It’s still too high, so just eliminating wheat/gluten from my diet isn’t going to magically fix things, but I think it’s a step in the right direction. I also have noticed my jeans are a bit more loose, and regardless of the reason that is a good thing.
It appears that gluten sensitivity is genetic, and when I look back through my family line, particularly my father’s side of the family, I have to wonder if this is something in my family. It can take up to a year to really be “fully healed” from the ravages of gluten problems, so it will be an interesting journey for sure. I am encouraged by the initial changes in just a few days and plan to continue with our GF diet.
I’ll be posting recipes, so be sure to check Purposeful Nourishment and see what we’re eating!
Share
Pin
Tweet
Share
Share

« Gluten Free? What Can We Eat, Then?
Millet Meatballs (and Why We Went Gluten Free)(NOT THM) »