Recently, I realized that I am beginning to dread the hour or so immediately before suppertime at my house these days. Probably mostly due to the lack of planning on my part…but also because that time of the day has become vapid…I’m bored with food.  I don’t even really want to try new foods. I don’t want to bother with eating.

My family…well, they expect to be fed and fed well as I have set the bar high for myself. Now, I am bored with cooking simply because I am losing interest in food to some degree. There would be much more time in the day for snuggles and walks and splashing in the pool if I just didn’t have to fool with meal preparation.

Today, the return of the familiar It’s Five Thirty and I Have No Idea What to Make for Supper Villian came sauntering through my kitchen…well, dining room actually…that’s where I was glued to the computer at the time. I finally decided to go face my arch nemesis…Suppertime.

Fortunately, I was armed to the gills with cookbooks and instant access to millions of recipes at a few strokes of the keyboard so my nemesis was doomed from the start. I also had my faithful sidekick Freezer on my side (though I wonder how well Little Freezer Over the Refrigerator will feel when Chest Freezer moves in this weekend…) who produced a bowl of chili thrown together a few weeks ago. Fire roasted tomatoes, navy beans, my secret mystery blend of spices (a mystery because I’m a “dump cook” and don’t remember what I dumped in there), and some organic, free range, wild fed “forest beef” my husband bagged during deer season last year. Quite tasty. I had made it for some friends who came over to watch a race, and she (who is very finicky about chili and won’t even eat her mom’s) ate two bowls of mine. One bowl could be considered polite, but a second helping would indicate to me that it was good…or she was absolutely starving, perhaps.

Needing a side dish to go with the chili, I decided that corn bread sounded good. A quick perusal on the web and I realized I was woefully unprepared for making cornbread…I had forgotten to get eggs this week. And since I live in a rural town that apparently is infected with some kind of poultry bigotry, I can not have a couple of chickens in my back yard to keep me supplied with fresh, organic, free range chicken eggs. So, a change in search parameters to eggless cornbread dredged up a couple of promising recipes. Here’s the one I went with (and my modifications): 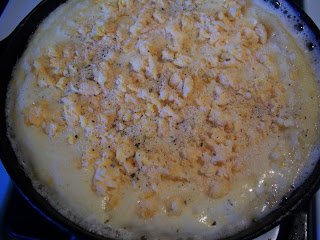 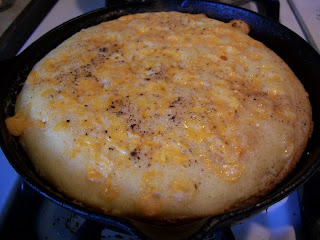 The end result was actually very delicious. The cornbread had a nice, crispy outside, delicious cheesy, oniony, garlicky flavor with just enough pepper flavor to not be overbearing. Inside was moist and fluffy, yet with enough structure to not crumble as soon as you touch it. I think it was one of the best cornbreads I’ve ever made. 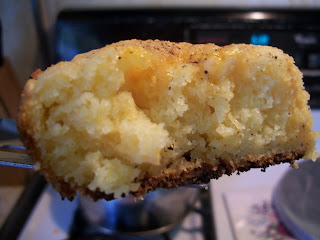 So, in the end, Suppertime was vanquished to the far-off realms of Stretchy Waistband Land and Mom has lived to cook another day. Will Suppertime return tomorrow, begging for a rematch? Tune in tomorrow…same batter bowl…same stove…but hopefully, something excitingly different to eat!