This household is a big, big fan of pizza. We eat pizza every week, typically on Fridays. That started when I was doing grocery shopping on Fridays and getting home late in the evening and I did not feel like looking at any more food, much less preparing it…so I’d grab some frozen pizzas for a quick meal.

Since I’m trying to accomplish two challenging tasks…preparing and serving healthy (or at least healthier) foods and spending the very least amount of money to do it, I started making my own pizzas all the time. I’ve been using a very fast, easy and delicious pizza crust recipe for years and it is very adaptable. I don’t think I make it exactly the same from week to week, whatever sounds good while I’m making it is what I throw together.

It’s just called “Pizza Crust” in my Amish School Fundraiser cookbook, but I have renamed it…

One thing I don’t care for in some of my Amish/Mennonite/Country cookbooks is that the people who submit the recipes apparently don’t think about the fact that not everyone knows how to make things from scratch. Sometimes, people need detailed instructions. But honestly, if you followed this recipe exactly as I typed it, you’d be fine. I usually mix the dry ingredients together first, then add the water and oil, but I have made it by dumping everything together and mixing it up. It’s very forgiving. Sometimes, I prebake the crust a little, if it’s very thick. This is delicious as a deep dish pizza in a nicely seasoned cast iron skillet…the crust gets nicely crispy on the outside and soft and yummy on the inside.

One thing I want to do, to make it more ‘instant’, is make several batches of the dry ingredients and freeze them in freezer bags. Then all I have to do is grab a bag and add the oil and water. Easy just became ridiculously easy!

Now, how do I make this healthy/healthier? Let’s start with healthier…

Well, I do the best I can with what I have. Just not buying food full of chemicals and overly processed ingredients is a step in the right direction. I try to sneak as much healthy into my dishes as I can get away with. A mom’s gotta do what a mom’s gotta do… 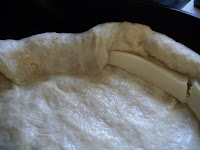 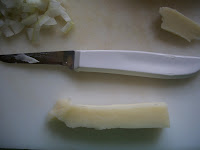 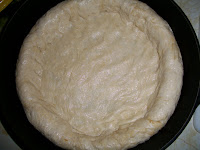 All mozzarella sticks are covered by the dough, which is pressed tightly to seal. 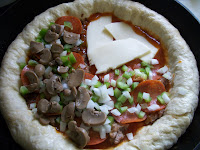 This is how I make every pizza…1/2 usually has sausage and mushrooms, sometimes it’s ‘supreme’, 1/4 cheese, 1/4 whatever I want on it, typically one or two toppings. Tonight I went with the supreme minus the fungus.

Finished pizza…next time I won’t put as much dough around the edges to cover the cheese, almost too much! 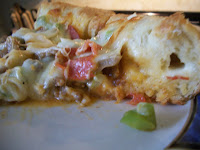 Yummmy! The cheese in the crust was a nice touch!

« Speaking to Our Obstacles
Suppertime, You Used to be My Friend… »