One of the things that I mourned at the thought of HAVING to be gluten free (instead of just choosing…very different, you see…) was bread. There is nothing so comforting as the smell of a delicious, yeasty wheat bread baking in the oven and filling the house with wheaty, carbolicious joy. And, God has given me a gift with bread making…I can usually turn out a pretty mean loaf. Then there’s cookies, pies, biscuits…sigh…
Of course, I have been searching online for easy, tasty GF recipes and the two I tried today did not disappoint. In fact, I was quite impressed with the GF Sandwich Bread from Serious Eats. Seriously. I read through all the comments and the only changes I made were adding a tablespoon of honey (there is no sugar in the recipe, and someone suggested it to make the gf-ness less obvious, especially for someone new to GF eating) and I used whole milk…not a big fan of powdered milk here. I used 1 cup of water and 3/4 cup whole milk. Be sure to read through the directions and comments before making this, if this is the first time you’ve tried a GF bread. There is a lot of great information there regarding GF baking. I half expected it to flop, since I don’t really know what I’m doing when it comes to using GF flours, but it was definitely a success and a keeper as far as I’m concerned!
The taste and texture are slightly different than wheat bread, but not in an offensive way. Sister LOVES it, so you know it’s good. Mister likes it too (and so does the dog…he dropped a chunk on the floor).  I’m happy that tomorrow, we can have sandwiches for lunch!  Doesn’t it look delicious? It looks like real bread! 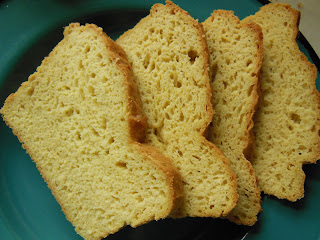 We were having my mom over this afternoon, and company for dinner so I decided we needed some brownies. I found a great recipe for Gluten, Casein and Soy Free Brownies at the Bob’s Red Mill website. I didn’t have unsweetened chocolate, so I used the old stand-by substitute of 3 Tbs cocoa and 1 Tbs oil (coconut) and they turned out great! I prefer a fudgey brownie over a cakey one, and this one was nice and fudgey.  The Teenager asked if I made them differently and when I told him I used a gluten free flour he didn’t like them. Oh well, his loss…and more for the rest of us! This made a 9 x 13″ pan and I cut it into 20-24 brownies, I should have counted but didn’t, and only four were left when I cleaned up from supper.  Really now, do you think you could pass these up? 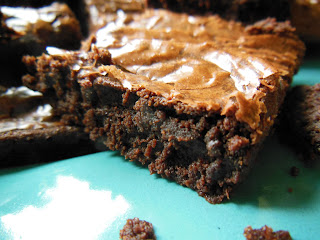 My daughter said today “Well, maybe this gluten free thing won’t be so bad after all.” Yeah, I think she’s right. I don’t know why I had my knickers in a bunch now…
Share
Pin
Tweet
Share
Share