Well, at least that’s what it seems like these last few weeks. I have gotten very lazy about menu planning. In fact, it’s Wednesday night and I should have a menu planned and coupons organized by now. And, well, I don’t!  The pantry and fridge are getting pretty bare, so it was a Throw-Something-In-A-Pan-And-Pray kind of night. It actually turned out very tasty! Seems like some of my best meals are forged in the adversity of a bare pantry…
Summer Garden Skillet 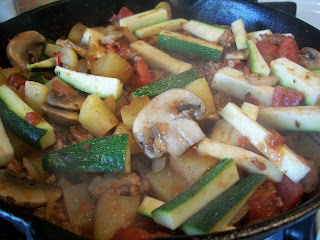 Brown sausage in pre-heated, medium cast iron skillet; drain if necessary. Add potatoes and onion and cook, turning occasionally, until potatoes are almost tender. Add tomatoes and juice, bring to a simmer and add mushrooms and zucchini. Cook until zucchini is crisp-tender.

TOTAL COST: $1.76, COST PER SERVING: 59 CENTS. This served 3 adults comfortably, Miss Picky and Mister Messter didn’t eat much and there were no leftovers. It could have easily stretched farther with more vegetables. I didn’t figure in the cost of the biscuits, but I’m sure it was less than $1 for the batch. If I’d had the time or inclination, I would have whipped up more of a delicious cucumber salad I made recently. A crisp, green salad would have gone nicely with this as well as some fresh fruit. This would have altered the cost of the meal, but I speculate it could still stay under $3 for the total meal, assuming that you have a vegetable garden or access to free or very inexpensive vegetables.
The improvements to the highlighted items are generally the same as the last post...sausage could have been from pastured animals, veggies and fungus could have been organic. And the BPA in cans makes the tomatoes a less than desirable choice. I would much rather prefer to pick some tomatoes from my back yard. However, they are still quite green…although I did entertain the idea! I did love how the seasoned tomatoes made this very simple, I just added a little sea salt and organic black pepper. When I can tomatoes this year, I want to do some seasoned with herbs and garlic.  I served it with whole wheat biscuits made with olive oil. They turned out a little dry, I will have to work on that recipe! All in all, it was very delicious and satisfying. I love summer produce!
This dish was still far more healthy (not to mention economical) than something prepared from a box or picked up at a drive through. We went to a movie today ($1 tickets!), and ate at Wendy’s before we went. I have to say that while it tasted fairly good, it was not satisfying in the least. I was still hungry for hours later…I think my body was craving real food! After our supper this evening, I am much more satisfied. I used to eat at fast-food places fairly regularly, especially when I was younger and it never phased me. Now that I have not been eating as many chemicals, preservatives and refined foods, I really notice a difference in how I feel. Even one meal at a burger joint upsets the balance. I was a crab this evening, and my daughter had a stomach ache. It just strengthens my resolve to do the best I can to serve real, whole, nourishing foods to my family.
Share
Pin
Tweet
Share
Share