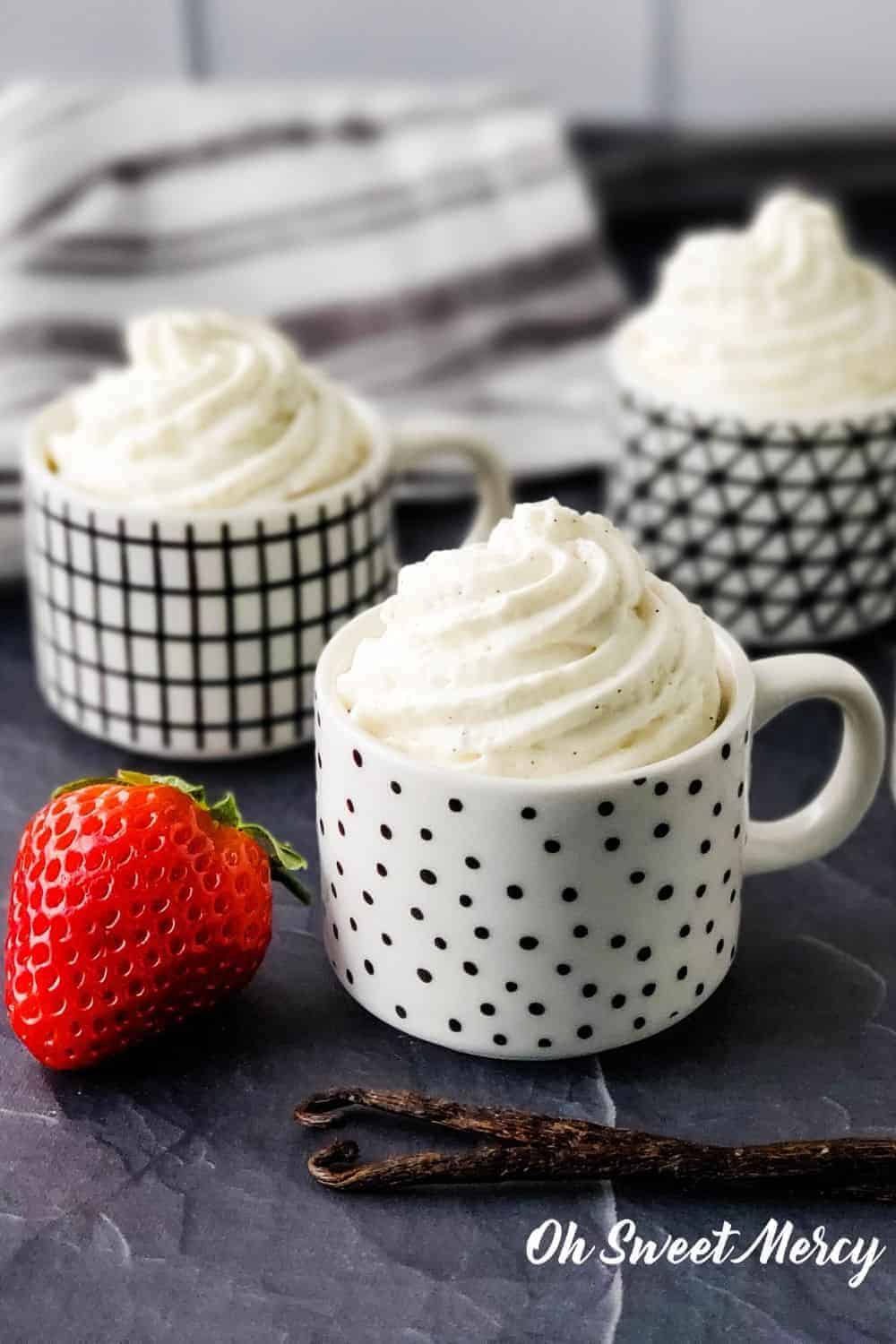 Creamy, airy, lightly sweetened, and infused with vanilla bean, this sugar free vanilla bean mousse makes an elegant dessert for special occasions. Perfect with fresh berries, a sprinkle of cacao, or even espresso powder. Trim Healthy Mamas, this is a low carb S treat the whole family will enjoy!

Some easy mousse recipes call for cream cheese. However, if you’re a Trim Healthy Mama plan follower you know it’s wise to be moderate with Heavy S foods. So, to keep the Heavy S aspect of this dessert a little less heavy we’ll use gelatin instead.

If you don’t like cream cheese then this is the perfect easy mousse recipe for you. Also, sometimes the tanginess of cream cheese is just not what you want.

This homemade vanilla bean mousse keeps it simple. Just the rich, creaminess of heavy cream, a little sweetener, and vanilla are the all the flavors you need for a delicious dessert.

With just 6 ingredients and about 45 minutes you’ll have a beautiful, low carb dessert ready to enjoy.

I use the whisk attachment on my immersion blender and the whipping cream whips up less than 5 minutes. A hand mixer will take a little longer, depending on how powerful it is.

And of course, the Cadillac of stand mixers, a Kitchen Aid, whips up this elegant mousse in no time flat!

This recipe comes together in 4 easy steps:

You can then spoon into dessert dishes and refrigerate or just refrigerate the whole bowl of mousse.

Or, to pipe fancy bowls of vanilla bean mousse refrigerate the whole bowl first. The mousse mixture will be a bit slack after adding the gelatin but will firm up after at least 30 minutes in the fridge.

Then, put into a piping bag or decorator and attach the desired tip to pipe a beautifully shaped mousse.

While making mousse really isn’t complicated, here’s a few things to keep in mind for the best results:

The Colder The Better, Especially In Summer.

For heavy cream to whip properly, it’s best that the cream and your utensils are very cold. In the winter, room temp shouldn’t be an issue. However, in the summer, especially if you don’t have AC, it’s often harder to make whipped cream.

Put your bowl and the whisk attachment or beaters into the freezer for a few minutes before making the mousse.

I worked on this recipe in February and my kitchen tends to be on the cooler side. I had no trouble with room temp equipment, just as a comparison.

Use A Finely Powdered Sweetener To Avoid Grittiness.

As it’s already a fine powder, grittiness isn’t a problem. Not so with stevia and erythritol (or other on-plan sugar alcohols) blends. The sugar alcohols are grainy and don’t always dissolve easily especially in cold liquids.

I also tested with Pyure Organic Stevia. This is a blend of stevia and erythritol and similar to THM Super Sweet for most people. It’s also a granular stevia blend and often found in grocery stores.

To make sure your vanilla bean mousse stays smooth and creamy when using a granulated sweetener like this, powder it first. This is easily done in a coffee grinder but if you don’t have one, a mortar and pestle will do the trick.

You can also use a blender. However, you might want to blend up more than just the tablespoon or so this recipe needs and keep it on hand for future recipes needing a finely powdered sweetener.

You’ll first bloom the gelatin powder in cool water. It will look a bit like applesauce after it sits for several minutes and absorbs water.

Then dissolve it with the boiling water. Let it cool a bit before adding to the whipped cream.

Then, pour in a thin stream while whipping or add by the tablespoon, mixing after each addition. Adding it all at once runs the risk of the gelatin clumping up before it can be fully incorporated into the mousse.

How To Include This Dreamy Vanilla Bean Mousse To Your Trim Healthy Mama Meal Plan.

As I mentioned above, this is an S recipe – specifically, a Heavy S due to the use of heavy whipping cream.

It’s best to enjoy this as a dessert after a lighter S or even a FP (Fuel Pull) meal. However, it’s still suitable after a heavier low carb S meal. Just don’t do that too often!

Making this easy vanilla bean mousse for a party or other gathering is also a great idea. You’ll get to have a little without the whole recipe staring at you every time you open the fridge and tempting you.

You know, when you should be eating an E or FP and not getting stuck in an S rut!

However you choose to enjoy this creamy, airy treat you can relax knowing you’re eating an on-plan dessert!

If you're tasting for sweetness before adding the gelatin, keep in mind that the gelatin will reduce the sweetness a bit after you add it.

I tested this recipe using Great Lakes Grassfed Beef Gelatin. I do not use pork gelatin like Knox so I'm not sure how that compares.

Nutrition information is approximate and based on the best knowledge available at the time of recipe publication. Your results may vary due to differences in ingredients. You can make your own calculations if this recipe does not include nutrition info by using an online calculator such as https://recipes.sparkpeople.com/recipe-calculator.asp